The Plight of the Haggard Homeowner... 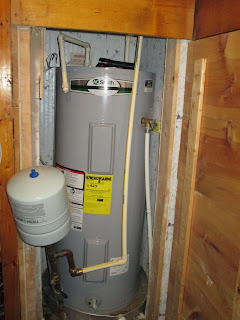 This is why there is mariticide. (Mariticide (from Latin maritus "husband" + -cide, from caedere "to cut, to kill") literally means the killing of one's husband or boyfriend. It can refer to the act itself ...) Sometimes someone just needs killing. Numerous trips back and forth for parts because things don't fit.  Cut out part of the wall because this new water heater is bigger than the old one. (Don't ask).  No hot water for 3 days now. It has been a home repair shit show extraordinaire.  Then it was all piped and the glue dried and ready to turn on, only to find out there was an airleak in the pipe leading to the overflow bladder, which must have gotten damaged trying to get the old heater out.  Of course, it's on the BACK SIDE of the copper pipe, so there was no seeing it ahead of time. He is at the end of his rope...my uber intelligent nice guy of a husband. He considered strangling the boy at the Rural King who had no idea what he was talking about, when he was looking for a coupler to fit the pipe he had to replace.   He is not generally a violent man.  But I suspect that home repairs can turn even Caspar Milquetoast into Charles Manson.  He just came in and said everything is glued and in place and now we wait 2 hours for the stuff to dry.

Not one to ever know when to give up, he's back there, at it again.  I am in the other end of the house, except when he needs me to do something useful, like google the difference between  C PVC and regular PVC. And offer moral support.

In the meantime I am working on the back bedroom, cleaning it up and getting ready for a house guest this next weekend.  That poor room... everything with no home winds up in there.  It IS the home for some things. The closet is a storage/pantry. There's a shelving unit that houses several small appliances, including 2 crockpots, a rice cooker, a dehydrator, an electric skillet, a waffle iron, a George Foreman grill, a large cone colander in a metal stand.  Last Christmas's rolls of paper, bags of ribbons, gift bags  and several assorted and sundry cardboard boxes were on the bed. Other things that I put in there, thinking--I'll get to those later (and don't).  And of course, that also where, all along one wall, we store our 45 gallons of sprig water that we get from the springs and drink, There's a large dresser on another wall that houses linens and stuff.  The top of said dresser is a train wreck.  It will take me at least 2 days probably to get that room cleaned up. But git 'er done I shall.  I've made a big dent in it today. Work a while, stop a while. Work a while again. It's my MO. lol

I found a fully cooked smallish (loaf pan sized) meatloaf in the freezer that is thawing for supper tonight. Trying to empty out enough of the freezer to be able to put ice cube trays in.  lol  It's 88 right now, and feels like 94. We've gone from winter to summer it appears. It's not horrible in here, AC and fans going, curtains drawn. Drinking lots of water. I'll heat the meatloaf in the airfryer, cook some potatoes with onions in the microwave and heat up some peas the same way.  Not much added heat to the house that way.

**New update:  Apparently he forgot to glue that particular joint..  All the pieces had to be dry fit and then glued and he overlooked one.  Bless his heart. He glued it and is now off to the park with a dog.  He needs a break from this circus...lol

Well, I'm ready to get back at it.  There are canning supplies in there that I need to figure out whether to put in the garage or ??  And I may vacuum and I may not.  Might be a tomorrow job. We'll  see. AT any rate, it looks like we may have the water heater installed.  Again-- we'll see.  Hats off to all of you people who manage to keep your homes and homesteads in working order without resorting to murder.  Prayers for those of us who struggle.

Happy last week of May.

Thank you for sharing the water heater debacle. That’s routine stuff in my life cuz Wayne maintains...count em...7 cars and 5 houses. All.by.himself. I swear he will blow a gasket and cash in his chips one day.

My garage is your spare room. Another month and the car will sit outside.