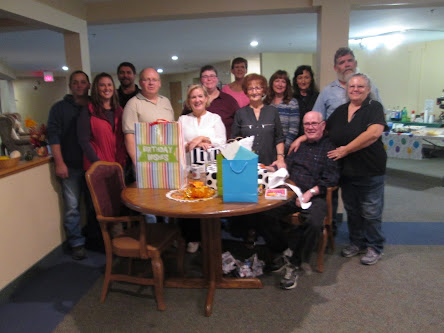 This is my favorite picture, taken at his 80th birthday party, in Altoona Wisconsin in October of 2016.  Our little inside joke was that I was his "favorite daughter-in-law".   Joke because I was his only daughter in law.  That's how I would always sign our cards to him and when I talked to him on the phone, I'd say Hey Pops-- it's your favorite daughter in law !  And we would both laugh.  I met Gordie Kelley about 8 or 9  years after my own father had died, so he was my dad's stand in for the rest of his life. They were a lot alike actually, in temperament and personality, so you can imagine I loved him from the beginning.

They will lay him to rest tomorrow, up in northern Wisconsin, next to his first wife, my husband's mother. He was blessed to have known love twice, his second wife died about 6 months ago. She is laid to rest next to HER first husband, in the same Catholic cemetery.  Their children will gather to pay their final respects to a man that fiercely loved his family, was unwavering in his commitments to the Lions Club and the church choir, and was the craziest pontoon boat driver I've ever been on board with.  He loved his little trailer up at the lake, and fishing and drinking beer. He served his country in the United States Navy and was an active veteran. A couple of years ago, he got to take part in the Freedom Honor Flight with his daughter (a retired navy person herself) by his side.  Freedom Honor Flight flies veterans to Washington D.C. to visit the memorials built in their honor. The day trip includes visits to the World War II Memorial, Korean War Memorial, Vietnam Wall, Marine Corps War Memorial and Arlington National Cemetery. With spring and fall flights, the organization coordinates the transportation and itinerary of more than 200 veterans annually.  It was probably one of the highlights of his life. He was a really nice man and I am so grateful to have had the chance to be part of his family. He totally and enthusiastically accepted me from the start --  no questions asked, no conditions. He was one of those rare people who loved with their whole heart.

So, it's been an emotional and relieved time for all. He was ready to go "home". He had been in a nursing home for over a year and it was hard for him to understand why no one was coming to visit (Covid) and when his son called him (usually a couple of times a week), he was more and more confused.  His health had declined and his will to live was diminished.  We are all so thankful that he didn't suffer too long and that most of his children were at his side when he made the decision to let go.  It will be hard to learn to live without him, but he leaves behind a trail of smiles and family memories and Packers memorabilia and comfort in the knowledge that he lived a good full life. He lived to see his great grandchildren born.  I think, maybe, it doesn't get much better than that.

Goodbye Pops.  We'll see you on the other side.

What a lovely, lovely tribute to your father-in-law. My sympathies to you and his large, loving family.

sending a big ole Texas hug to you...