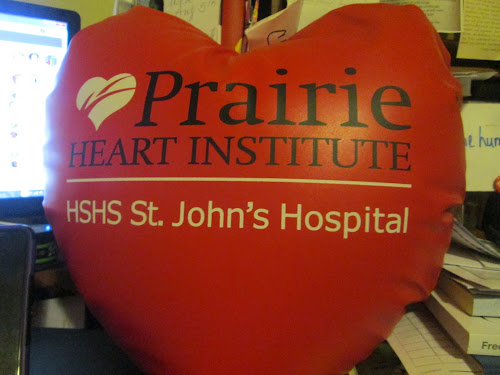 On August 9th, 2020  I had a mild heart attack.  I'd been having some minor issues for several days (weeks?) like  tightness in my chest (ala acid reflux, I thought), some shortness of breath and unexplained random nausea. Himself took one look at me and said-- put your shoes on, we're going to the ER.  I said, no, wait.... let me sit a minute and see if it passes.   I've been to ERs 4 times over the last 15 years with this stuff and it was acid reflux every time (they said). I got really clammy and sweaty and hot and he practically threw me over his shoulder and carried me to the car.  He asked if I wanted to go to Alton and I said NO--take me to Litchfield , which was about 5 minutes closer. We got there and my blood pressure was sky high, about 248/135.  I had checked it at home and it read about the same, so I assumed my cuff wasn't working right. lol  They did initial tests and said they were going to keep me overnight for observation and run the tests again in 5 hours.  When they did, I was off the charts. They came in and told us they were making arrangements to send me to Springfield (our state capitol) to St John's and the Prairie Heart Institute. They said I had had a heart attack. I was baffled.  I arrived up there sometime the next morning and was put in a bed on the Cardio Vascular Care Unit. That afternoon a cardiologist came in and filled me in. Said the troponin levels were trending back down, which was good news.  He ordered some more tests and blood work and said that when he got those results, he would decide if I got a stress test or a heart cath the next morning. I told him I was pretty sure my heart was okay.  He smiled and said-- we'll see.  But..but.. I eat way too much brown rice and kale to be having a heart attack !! I don't smoke !!  Never have.  I don't drink !  I eat healthy !  He said he had looked at my family history of heart disease and sometimes genetics win.  Came back in later that evening and told me that I was scheduled for a heart catheterization first thing in the morning.Gave me a bunch more information that I don't remember.

The heart cath showed a 90% blockage in the big artery and 60 and 80% blockages in the other 3. He told me they call that big  artery the widowmaker. Seemingly healthy people walking around and suddenly drop dead in the garden.  So, I was scheduled for a Quadruple CABG first thing in the morning on August 13th.  It was about a 7.5 hour surgery.  Except for the vein harvest in my leg, it went off without a hitch. Luckily I came with all my own spare parts, but the guy had a helluva time getting that leg vein to cooperate. Said he NEVER had problems like that one.  So my leg looks pretty gnarly (it's healing, but damn...).  Seems the process for this surgery is pretty grotesque.  They deflate your lungs to get them out of the way. They somehow dehydrate your body (for less messy cleanup, I'm assuming)  lol.  Then (as one nurse said when I was complaining about my back hurting)--"They lay you out like one of those flattened deboned chickens".  After the fun is over, they wire your breastbone back together and glue and stitch you up. Start the process of RE-hydrating you. They must have pumped a million gallons of fluids back into me  lol  Then after you are out of the Cardiac ICU, they put you on lasix to get any extra fluids back out of you.  It's dizzying. I had a terrible time coming out of the anesthesia. I have been clean and sober for over 30 years, and being bombarded with all the drugs sent me into a tailspin. I hallucinated for 3 days post op. I was so scared, I can't even tell you. I was afraid I had brain damage. Then they tell you you need rest, and proceed to wake you up about every 3 hours for blood tests and xrays and vitals checks. About 7 days later, if you're lucky, you get to go home.  I was lucky. So, now I have been home a little over 2 weeks. Everyday I am a little stronger and mostly feel a little better.  I am still tired a lot and nap a couple of times a day. I am pushing myself to try to do a little more every day. I am on a lot of medications (many of which I swore I would not take). But I promised himself that this time I would do everything they told me to do...so there's that. I am not a good patient. Ever.

I have a visiting nurse that comes twice a week to look at incisions and check me out.  My friend came down from up north to stay with me these first 2 weeks at home to help, and I could not have done it without her. I can never repay her for her kindness and assistance.  💜  Thanks Angela  💜   The outpouring of love and cards and gifts and well wishes from hundreds of people in my little world has been overwhelming. I am beyond humbled by the kindnesses.  I already know how traumatic events can change a person and this is no exception. In the midst of this pandemic the whole world is changing.  My little corner of the Universe, and myself (as the Queen of Quite A Lot) has shifted once again.  I am grateful to be alive.  And to have had maybe some of the best nurses and doctors in the whole world. The surgical team was most amazing, the hospital experience was stellar, and the nursing care was some of the best I have ever seen. So many things could have happened so differently...

True to form, I was the life of the party at the hospital (esp before the surgery), lol  I kept them laughing and acted like a complete Pollyanna thru the whole thing.  After I came home, I broke down for a bit and cried myself to sleep almost every night. Tears of gratitude, fear and relief.   Tears of getting way more love from people than I deserve.  Tears of coming a little too close to dying. It's not so much that I'm afraid to die, as I told a nurse one night, it's just that you're dead for such a looooong time.  lol

In the middle of my hospital stay, my mother-in-law died.  My husband left Wednesday to go to Wisconsin to help his siblings deal with stuff. His dad is in a nursing home there and he needed to see him. Life goes on... it's messy and the timing is bad sometimes and the wheels just keep on turning. Somewhere in the future, we will find the time for things to get back to normal.

I wish I would have known a long time ago so I could tell you....Annie Heredity Cholesterol is a total bitch to anyone who has it. I know because I have it. Dr told me I could change my diet and eat healthy all I wanted to but that wasn’t going to make what I have go away. Dammit! It wasn’t fair that I had to take that stuff at such a young age! I was 37. Now I know that I am lucky and blessed to be alive. I’m glad you are too. TAKE YOUR MEDS ❤️

Interestingly enough... my cholesterol is 180. Even the bad cholesterol was only a few points off. It's crazy.

Annie I am so grateful you are still here!!!! There is no doubt that you are a more than blessed woman. the widow maker has taken out more people in my family on both side. I am glad himself saw fit to make you go. You are so correct when you say it makes you humble. Much love Annie always!!!

My husband had a stroke on the same day of your heart attack. He's recovering but still having problems talking. I am so glad you are all right and am recovering from that surgery. And with a brand new revamped heart! Sending you all my best for a quick (ish) recovery. :-)

Oh bless you, and hope you take the time to get well again. You have the right spirit to win through. Vx

OH! Ive been waiting fir your blog this time and you never disappoint. Love you a whole bunch and look forward to seeing you in person one day soon. Keep coming Annie.

well fuck..I didn't know any of this..I'm so glad your healing and coming back to us..tits up chin out..will give the Goddess something shiny for you.

Sending healing thoughts to you!

Well the best news is you are still here!
Both my parents are 89 years old. Dad (as deaf as can be) still goes working on the land every day, if not he is dead. Mum recently bought an e-bike as compromise cause she still bikes every day. We live in the Netherlands, very flat but often windy. So they are my role models.
I hope you will win back your strength day by day and will give us the joy of reading your blogs for a loooooong time.
As we say in Holland: "Blik op oneindig and doorgaan". Translation (something like) look at infinity and carry on (?)
Wendy

Oh my goodness. That must have been scary. I am glad you are here. I hope you take it slow and easy. And I hear you about taking meds you said you'd never take. I hear you. Thinking of you as you tend to your healing.